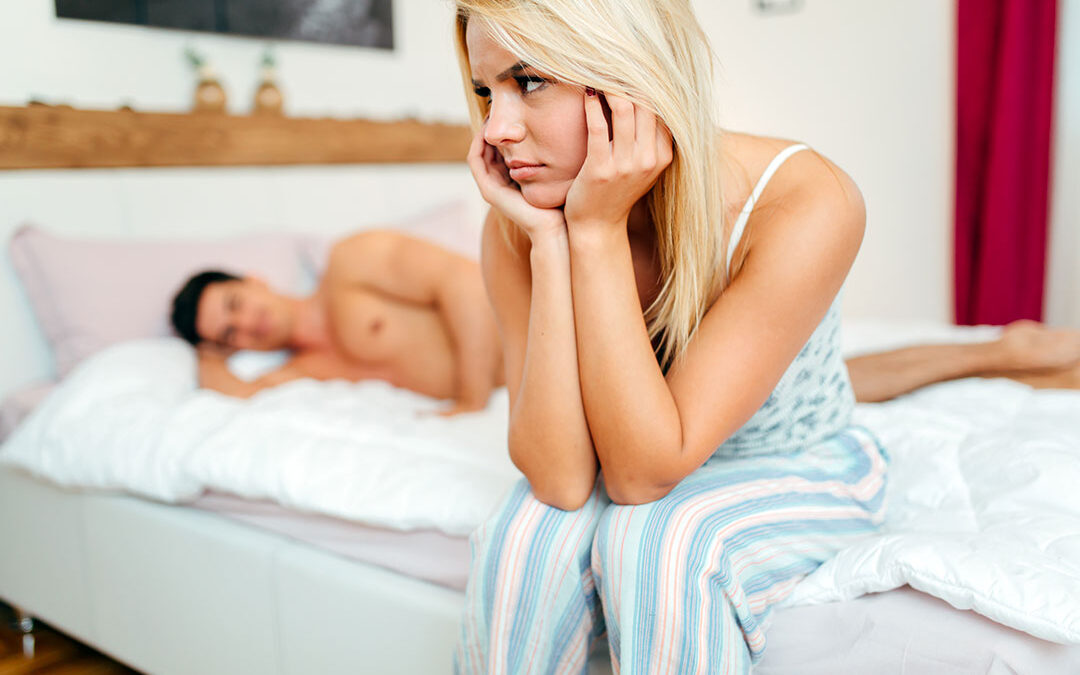 You’re a hetero female and your boyfriend has lost interest in sex. You feel lonely and even embarrassed when you want to have sex but the feelings aren’t reciprocated. Sexual rejection hurts, and it’s easy to take personally. You wonder, “Does he not find me attractive anymore? Is he watching too much porn? Does he have a lover?” You ask him directly and he assures you it’s not you, it’s him. He’s not even sure why his libido is low. Maybe it’s because he’s stressed at work; this is his excuse at least. But it’s been going on for months, and you are feeling more like his best friend than his romantic partner. You’ve suggested therapy on several occasions, but he refuses. You are scared: What if this never changes? In just about every other way, he’s a great partner. One Monday morning you call me out of desperation. It was another sexless weekend, and you can’t take it anymore.

When we meet, I assure you that this scenario is more common than you realize. Desire discrepancy is typical. One partner almost always prefers more sex than the other. But just because others struggle with this too doesn’t make it any easier for you. Here are some things I’d talk with you about:

Is he depressed? People don’t always know when they are depressed, and they don’t have to be severely depressed for libido to be impacted. Depression can manifest in many different ways: Has he lost interest in more than sex? Is his confidence low? Has he gained weight, stopped exercising, and started feeling unmotivated generally? It may be that his low sex drive is the result of just generally not feeling good in life. If people feel disappointed by life, or like their life lacks purpose or meaning, they feel less vital and alive. Without a sense of vitality, it’s hard to initiate sex. If this is the case, talk to him about your concern for his emotional health, and encourage him to get help. He doesn’t have to feel this way.

Does he feel disempowered in your relationship? I often ask couples directly who holds the power in their relationship. Often their answer is that they share the power, but this is frequently not the case. Today’s couples are very conscious of equality in all its forms, and they try hard to manage a power balance. n a hetero couple, though, this sometimes means that in an effort to be a “good guy,” he may concede power to her. It’s an arrangement that works well for them outside the bedroom because she often cares more about how their day-to-day lives operate than he does. Unfortunately, though, dynamics that keep a romantic relationship running smoothly don’t always translate well to the bedroom. In this scenario, this could mean that he’s become more of a follower than a leader in your relationship, which can unconsciously impact how he expresses himself as a sex partner. At best, he’ll rally for sex when you initiate. But it could mean that he’s lost interest in sexual interaction altogether. If you think this could be an issue in your relationship, perhaps reading this post together will help him open up. See if you can figure out where he’s lost a sense of power with you, and how the two of you can work to change the dynamic. Finding your way back to true equality is your goal.

Is there enough playful sexual tension in your relationship? When couples are together for a while, their relationship outside the bedroom may become less playful. Life’s responsibilities take front and center, and people naturally channel their energy toward managing life as opposed to stoking the fire in their romance. But this can negatively impact what happens in bed, sometimes significantly. People stop flirting, stop dressing sexy, and their interactions become more routine. See if there are things you can do to add lightness and playfulness to your interactions. It’s easier if both members of a couple decide to increase sexual tension between them, but you alone can impact your relationship at night by manifesting some playful, sensual sexual energy by day. (For more, see When a Man Loses Interest in Sex.)

I support the idea of seeing a sex therapist because issues like these can become more challenging as time passes: People risk feeling more isolated, hurt, and misunderstood if intimacy challenges endure. Most couples struggle with intimacy issues at some point. It’s how you handle them that count.

The Future of Intimacy